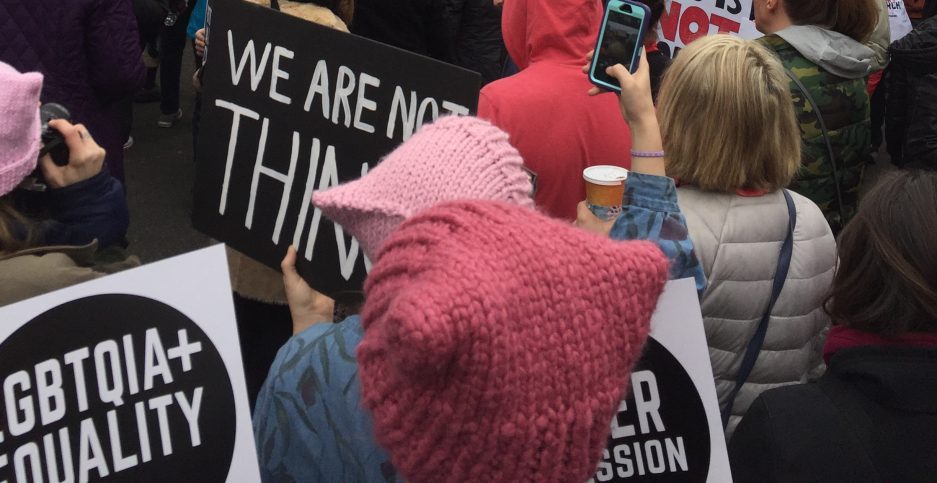 There were a lot of reasons I didn’t participate in the protest movements of the ’60s and ’70s. In retrospect, most of them still seem legitimate (although boy-chasing might not make the cut), but I do remember being somewhat disdainful of those who did. I was a much more establishment person than my younger sister, but not quite as rigid as my older brother. That’s been the story of my life: Too old for this, too young for that. Middle child, middle path.

I first put my toes gently into the waters of protest and civil disobedience in the late ’70s when I protested the actions of the mayor of the small Florida town where I lived. We marched. We gave television interviews. We wrote letters to the editor. We hanged the mayor in effigy. Our efforts were largely unsuccessful, but at least we hadn’t sat home doing nothing.

So last month when I dragged my somewhat-reluctant daughter-in-law off to D.C. to the Women’s March, I was nearly as new to protest at almost-70 as she was at 40-something. But we did it. We both moved out of our comfort zones (I hate crowds, she hates crowds), and went off to an unfamiliar place to participate in an unfamiliar activity. And even though it very nearly broke my body, I look forward to participating in more actions.

So, how do we find those places where marches and/or protests are taking place? Last weekend after Trump signed and announced his overreaching Executive Order banning people from entering the U.S., demonstrations seemed to happen almost spontaneously at airports across the nation. Since they went on all weekend, it was almost guaranteed that you could show up at an airport and be part of a group protesting no matter when you went. But what about the not-so-obvious protests – how do you find those?

Google is your friend. Type “protest” and the name of your city (or nearby big city) into the search bar. You can also check out the American Civil Liberties Union  and get on their mailing list. Better yet, ask if you can volunteer; they need more help than just attorneys. This Mashable site also has a lot of good suggestions for getting involved. Protest.net has a list of activities by issue as well as several other good resources. You can also search groups on Facebook (some of the Women’s March groups have resources), and send out requests to your local friends on FB who might have information. The more connected you are, the better your chances of finding out what’s going on.

For those who can’t get out, there are postcard and phone call campaigns going on all the time. You can sign up to have a weekly action checklist emailed to you here, or you can just go to the website at your leisure.

If you can’t do rallies or marches, offer to watch someone’s child so s/he can go. You might also offer rides to those who need them. There are many ways to help and all of them are vital.

I’ve begun keeping a list of information to use to debunk the lies that flow from the Trump White House. I’m starting it here, but will also create a document that will be updated as necessary. Please feel free to disseminate this blog or any other information as you find helpful.

Alt-Fact: The addition of Steve Bannon to the National Security Council is in keeping with the actions of Presidents G.W. Bush and Obama

Alt-Fact: Trump’s immigration policies are no more restrictive than Obama’s

I highly recommend Politifact and Snopes for checking what you read online – and especially before you post something that seems too far-out to be true. Unfortunately, we are in a situation where the unbelievable has become all too easy to believe, but by perpetuating questionable information we leave ourselves open to criticism and disbelief. Better not to post that questionable item than to be unable to defend it.

It’s critically important to take care of yourself. Activism is exhausting and outrage can only be sustained for so long. You may find it easier to throw up your hands and say “fuck it” than to continue on your course. Don’t do that, please! We need every voice, every postcard, every body! Here are some tips to help you de-stress, and if those don’t suit you, find someone to talk to or – as always – Google is your friend!

This collection is by no means exhaustive, so please feel free to add to it in the Comments!

Welcome to The Resistance!